Jim and Diana Goure created the Light Center as a place where people could come to pray and meditate anytime, any day of the year. It is dedicated to prayer for personal and planetary transformation.

Diana Goure was born in the Gore Mountain Range of Colorado. Born to New Thought parents, she grew up in a positive, spiritual environment. Diana met Jim in church and they were married in 1947.

James V Goure was born in Nebraska City, Nebraska, and grew up in Pueblo, Colorado, in a Christian environment. When Jim was twelve years old, his father died. This led Jim to a deep desire to know God and to seek answers. By the time he was 21, Jim had read all the Holy Books of the various world religions and had received insights leading to his writing the “SEVEN STEPS TO EFFECTIVE PRAYER.” Jim was a graduate of the U.S. Naval Academy and served as a Commander in the Navy shortly after World War II, then was attached to the Atomic Energy Commission in Washington, D.C. as a Senior Executive Officer. During his work with this commission, Jim became aware of the very real threat of a nuclear war. He realized that none of the diplomatic and military methods tried had established world peace. For years Jim had been protecting himself and loved ones by placing them in “bubbles of light.” The same could be done for the planet, he said, so he asked friends in Virginia Beach to join with his family in using the Effective Prayer.

In 1970, he took early retirement and moved with his wife, Diana, and their eight children to Black Mountain, NC. Here in the nurturing energy of these mountains, Jim and his family began to pray for peace four times every day. 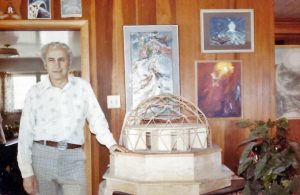 In 1976, Jim and Diana formed UNITED RESEARCH, INC., a nonprofit corporation to provide a vehicle for the receipt of donations to support education in prayer and the building and maintenance of a Prayer Center. In October 1979, the Light Center opened.

In December 1986, Jim made his transition, but his legacy continues. Diana made her transition on September 11, 2013.